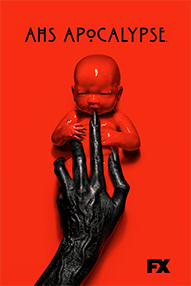 American Horror Story is a drama and horror television series created and produced by Ryan Murphy (creator of Glee) and Brad Falchuk (Nip / Tuck). It can be described as an anthological series, because each season is performed as an independent miniseries, with a group of different characters, different scenarios and a plot that has its own beginning, development and ending.

It has a casting that usually returns in some seasons, as well as guest actors who characterizes the season, as was it happened with the actress and singer Lady Gaga, or the model Naomi Campbell for the Hotel season, or Neil Patrick Harris in Freak Show.

Everything is confusing and dark in American Horror Story; from some of the most disturbing credit titles on television to the settings, going through characters who come and go on the scene when and how they want, with more than suspicious intentions. Ryan Murphy plays at his whim with a story in which nothing, however improbable as it may seem, can be discarded and always ends up connected in some way with the other seasons of the same series.

It airs on the FX channel in the United States, and it’s already in its eighth season, which will be released on September 12 this year. The seasons are as follows:


Despite not being an unconventional product, the mix of horror and psychological thriller that American Horror Story really hooks you up, there is no doubt of that. It's a series that could scare you a lot, and people like to be scared. Also, as soon as you watch the series, it catches you and you want to know more about the characters.

This series is an essential for horror lovers, it is a series in which you can really feel discomfort and even fear; but not only that, it has a fantastic black humor that makes you laugh out loud, and it's a kind of homage to horror and suspense films, with all the imaginable clichés. Each turn of the script is made to leave you with your mouth open, making you doubt if the whole plot or the problem will take us somewhere; the performances are incredible, like Jessica Lange, Angela Bassett, Sarah Paulson, Evan Peters and Katy Bates. The performance of Lady Gaga positively surprised many fans and even some hard detractors; showing that there is a real effort in giving the best of the series to catch the public.

Regarding its structure in general, we can say that the credit titles, costumes, photography and music are unsurpassed, and although the eighth season hasn’t been released, on January 12, 2017, the series was renewed for a ninth season, that will be aired in 2019, and on August 3, 2018 it was announced that the series was renewed for a tenth season, which will air in 2020, which makes it clear that there will be shocking jump scares from American Horror Story for a while.