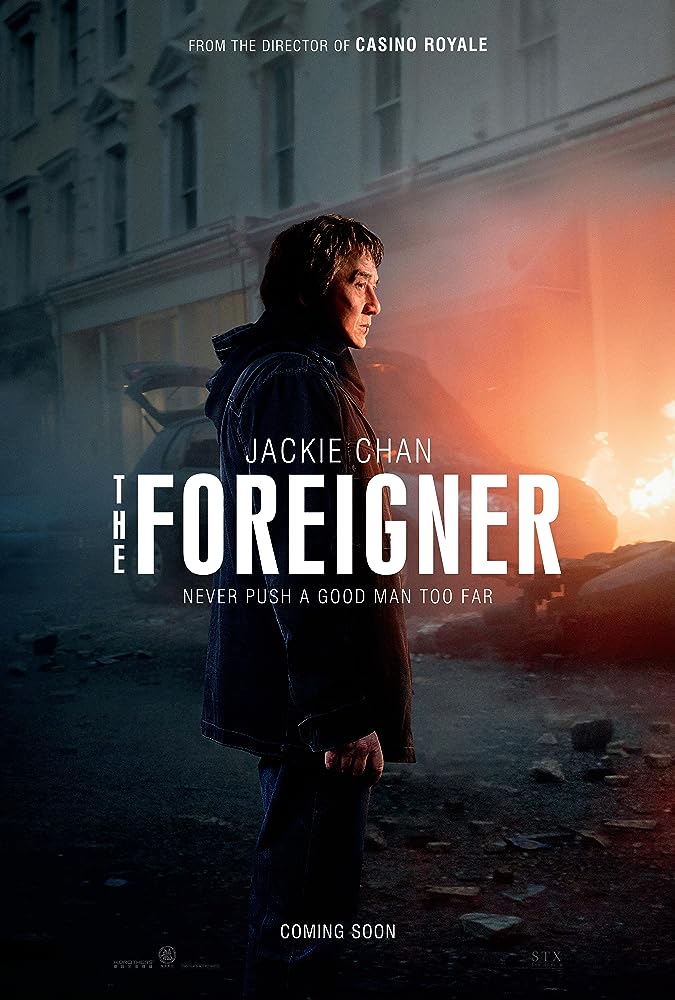 The Foreigner is a British-Chinese co-production; the New Zealander Martin Campbell (Casino Royale, Golden Eye) directs this political action thriller written by David Marconi (The Jungle 4.0, Public Enemy) and based on the novel The Chinaman (written in 1992) by Stephen Leather. Its cast are Jackie Chan and Pierce Brosnan; rounding out the cast are Dermot Crowley (Luther), Michael McElhatton (The House of Hope) and Orla Brady (American Odyssey).

Quan (Jackie Chan) owns a humble London restaurant and lives a peaceful life with a dark past that seemed to be far behind, until the moment his daughter dies in a terrorist attack carried out by a faction of the Irish Republican Army (GO TO). Desperate, he constantly appeals to the police for help and justice, and then, when he decides to take control by himself to avenge the death of his daughter. In his search, Quan will turn to Liam Hennessy (Pierce Brosnan), an enigmatic British government official who, in the past, was involved with the IRA. Thanks to Hennessy's connections and political position, the desperate Quan was able to find the names of those responsible for the attack and where his beloved daughter was killed. A tortuous hunt will begin like this, no matter what the consequences.

The Stranger would be classified in the political cinema, or black, almost a thriller. It has everything that can be expected from it, I assure you, which may be the true merit of the film. That is, how to make a film look good in its appearances, it fit in the genre film, in the setting. The result is very good, the plot is overwhelming, and the directing work fills the expectations. We can appreciate how a good theme is perfect for a treatment of script and direction that goes far beyond showing the appearance in the forms. The director is Martin Campbell, an expert in adventure films and action, and shows his experience and gives us a film that doesn’t stop at any time; on that side everything it’s all right, but the thing is that the subject would have required a something deeper and emotional touch. And it is precisely at this point, in which deep and emotional have been replaced by martial arts fights led by veteran Jackie Chan, who looks despite his years, capable of performing the great stuns that are his personal trademark. It took a little effort to take the adventure to a deeper reflection; and it isn’t that the film can’t include such reflection, but rather tries to avoid it, perhaps so that the spectator pays more attention to the adventure than to the moral and emotional background of the subject.

Violent, bloodthirsty and long, is a film not suitable for children under 16; offers the spectator spectacular shootings, fights melee (choreographed by Chan himself) and big amounts of political intrigue in a current environment where the line between right and wrong is blurred, so we will recommend it only for lovers of the genre.

Season 2 (2018) The creator of For thirteen reasons (13 Reasons Why), Brian Yorkey, does not have in this second season a book to sustain himself, but Jay Asher, the author of the original novel, has been part of the team that has written the thirteen scripts that make up this new batch of episodes, in which on the one hand the audience will know the impact of the final decision of Hannah and on the other hand will be exposed a series of new problems that will put in check the already known characters. The series goes with great courage in a multitude of issues that are left as little sketched to open a debate in society and is very aware that they are sensitive issues for the general public (the controversy will not cease), so that the new episodes start with a message launched by the protagonists and that leaves things very clear: season 2 of For thirteen reasons is part of a series of fiction, but if you are going through some of the problems that are narrated, perhaps not the